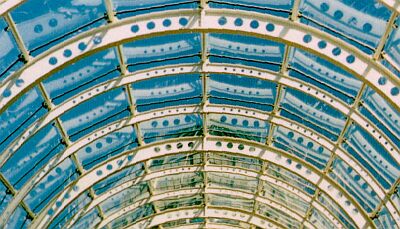 Castellated beams have a number of specific possibilities and advantages. They are light and strong. They are cheap. They have class! Easy to assemble at the construction site. The openings in the web simplify the work of the installer and the electrician, since taking pipes across beams presents no problems. After all, the web of the beam already has many wide openings by nature. Secondary constructional elements such as ceiling systems, can also be installed easily. And castellated beams are ELEGANT. Most architects rate the aesthetic value of a castellated beam highly. Which is why castellated beams are often used in applications where they will be (very) visible.

In certain instances the choice for castellated beams may not be so obvious. For example, when a beam is subjected to substantial concentrated loads. Or when the castellated beam is used as a continuous beam across several supports. In portals with rigid knee junctions, load concentrations occur which are relatively unfavourable for castellated beams. In such cases castellated beams must be reinforced at the places where these load concentrations occur. For example by inserting plates into one or more of the web openings. The additional fitting and welding work involved in this is relatively pricey. After all, each plate requires six (or eight) welds; which on a beam with a length of, say, 12 teeth makes the welding costs one and half times (one two-thirds) as high. The best (technical) solution in such cases is to border the openings in question with welded-on raised edges. Unfortunately this is also the most expensive solution .... Another minus point. When very high requirements are set for fire resistance, castellated beams could be less attractive since the fire resistant coating has to be around 20% thicker than for rolled sections in order to obtain the same fire resistance.

Castellated beams offer a designer all kinds of opportunities for "cutting to size". For example, in simple straight castellated beams the depth can be determined at will by changing the cutting pattern. In this way, the strength of the beam can be precisely matched to the occurring loads. That's what you call optimum construction! What's more, a castellated beam that tapers in depth can quite easily be made, by setting the cutting pattern not exactly parallel to the length of the castellated beam, but at a slight angle. After cutting, one of the two halves is reversed and the two halves are then welded together lengthwise. At one end both low sides come together, at the other end both high sides.

A third special possibility is the combining of a lighter upper half with a heavier lower half. Obviously, these will be cut from two separate rolled sections. As long as the number of castellated beams to be built is even, no material will be wasted. This last design is attractive, for example, when a subfloor steel beam and a concrete floor are combined. In that case studs are welded to the top flange of the castellated beam in order to ensure firm anchoring of the concrete to the beam.